Wheatley on film: “The Forbidden Territory” (1934) 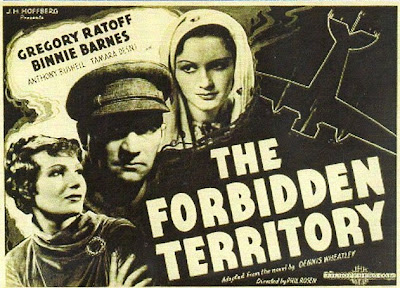 In Drink and Ink Wheatley explains the circumstances by which his first novel The Forbidden Territory also became the first of his novels to be adapted for the cinema.
His account begins shortly after the completion of Such Power Is Dangerous, his thriller set within the British and American film industries, in which Alfred Hitchcock appears as a secondary character:

Back in London I met with a delightful surprise, which later proved to be the only serious setback during my career as an author. Alfred Hitchcock had long been a friend of mine and I had seen him make films in the old silent days. He and his wife, Alma, then lived in Cromwell Road. We had often dined with them and they with us. Just as a friend, without any ulterior motive, I had sent him a copy of The Forbidden Territory. He rang up and asked us to dinner. When we arrived, he said at once:
"Dennis, your book is terrific! I'm going to make a film of it. But I'm tied up at present with Maxwell at Elstree and I don't want him to buy the rights, because I'm leaving for Micky Balcon in the autumn. Hang on to the rights for a few months, then I'll get Balcon to buy them."
Naturally, I was overjoyed.

From then on, as seemed invariably the case whenever plans to adapt Wheatley for the cinema were raised, the problems began. Balcon first insisted that Hitchcock make a Jessie Matthews vehicle called Waltzes From Vienna, and then vetoed Forbidden Territory as a follow-up. Still keen to make the film, Hitchcock found a new purchaser for the rights in the form of Richard Wainwright, late of Ufa films, now an exile from Nazi Germany. (The Wainwright company would also produce the subsequent film of Wheatley's Eunuch of Stamboul.) A screenplay was prepared, cast assembled (including the distinguished Sir Gerald du Maurier, Charles Laughton's favourite actor and father of novelist Daphne) and shooting date arranged.

Now comes the sad end to the story. Du Maurier died and was replaced by Ronald Squire, an excellent light-comedy actor but hopeless for the role of the Duke. Then Balcon postponed releasing Hitch to make the film for another three months. By then Wainwright had signed up his full cast and engaged expensive studio space. The one thing we had not put in the contract was that Hitchcock was to direct the film. As director he brought over from Hollywood a cameraman named Phil Rosen, who had never been to Europe before. Rosen's wife 'discovered' a 'real great little alley' to go shopping in. It was called Bond Street.
The film did not even get a West End opening. If only Hitch had made it, Hollywood might have bought the rights of every book I wrote thereafter. But it was not to be.

Actually, Wheatley is being unfair on a few counts here.
First, his description of Rosen as "a cameraman", though perhaps a genuine mistake, is entirely wrong. Though Rosen had begun as a cinematographer - in any event a very different order of responsibility from cameraman - he was also a director of vast experience, who had made an incredible 78 films over a period of nearly twenty years before being assigned The Forbidden Territory. He was no Hitchcock, for sure, but neither was he "a cameraman"!

Second, though du Maurier's absence is to be regretted, Ronald Squire does a perfectly good job once you bear in mind, as Wheatley seemed to have forgotten by the time he wrote his autobiography, that he is in fact not playing the Duke at all, but a far less accomplished and resourceful character called Sir Charles Farringdon.
The screenplay (by Hitchcock's wife Alma Reville, the only reminder of his involvement with the project) in fact eliminates all of the novel's male heroes, and replaces de Richleau, Rex and Simon with Charles Farringdon and his sons Rex and Michael.
This reduces at a stroke the need to spend time establishing the characters, and their complicated back-stories and relationships to each other, and allows the film to simply plough straight into the action. (After all, it has to fit the whole novel into a running time of just 82 minutes, later cut to 74 for the film's US release.) Now it is a much more easily comprehensible scenario: young Rex Farringdon has been imprisoned in Communist Russia, and his father and brother have come to rescue him.
The loss of the 'modern musketeers' seems much to be regretted now, but at the time, when nobody could have known that they would become recurring characters and 'bigger' in a sense than any one novel in which they appear, it is wholly understandable.

And in fact, beyond this one major alteration, the book adheres to the plot of the novel with surprising fidelity. It simplifies and streamlines, of course, cutting out many of the book's twists and sub-climaxes, but rarely does it actually depart from the broad outline of Wheatley's story.
Wheatley, who greatly resented the liberties taken with his scenarios in later film versions of Uncharted Seas and To The Devil a Daughter seems a little stingy here in not acknowledging the respect shown by Rosen and Wainwright to his creation. He would certainly have had no reason to expect anything like the same degree of generosity from Hitchcock, who was notorious for regarding his source novels as mere inspirers of mood and ideas, their actual plots to be altered or entirely jettisoned at will. His thirties films of John Buchan's The Thirty-Nine Steps and Daphne du Maurier's Jamaica Inn retain almost nothing of the originals beyond the central idea and main characters.

On its own terms, then, The Forbidden Territory is a thoroughly entertaining brisk jog through Wheatley's story, with some good action sequences shot on location in Latvia, and lively performances from Gregory Ratoff as Leshki, Binnie Barnes (fresh from playing Catherine Howard to Laughton's Henry VIII) as Valerie Petrovna and the beautiful Tamara Desni (who sadly died last February at the age of 97) as Marie-Louise.
Hitchcock, perhaps, may have made a better movie, but from the perspective of the Wheatley enthusiast, this is certainly one of the better screen adaptations of the man's work.