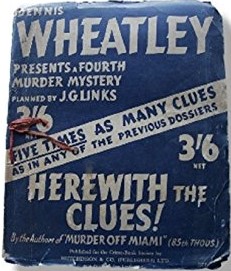 Herewith the Clues is the fourth and last of the crime dossiers Wheatley created in collaboration with J.G. Links. The series was already in decline but this is by some measure the weakest and least interesting: its original readers seem to have concluded that the idea had definitely run its course, and it's hard not to agree with them. (I have the advantage over them, of course, in knowing that it actually had.)

It's by far the most linear and  least convoluted; it makes less of an effort than ever to make the tangibility of its assembled evidence relevant to the solution, and there are no surprises at all. There's only one killing, and we arrive at the solution by examining the testimony of a series of interchangeable suspects, a fact which the authors make clear at the end by providing (for the first time) readers' score sheets, which explicitly tell them to list the suspects and their reasons for exonerating or continuing to suspect them. (The latter, one suspects, are as much a means of filling up space in the book as in offering help to the sleuths at home.)
It begins as a series of letters describing the events - this could easily be third person prose and would lose nothing - we then get a look at the bits of evidence, then see photos and descriptions of all the suspects, and that's that: we jump straight to the solution. It's all very mechanical, and I read the lot in half an hour. The cover boasted that it contained "five times as many clues as any of the previous dossiers", which may be true in a strictly numerical sense, but the amount of informed guessing the reader is able to do is virtually nil.
Wheatley, who had some frosty words of criticism for its predecessor, The Malinsay Massacre, betrays no feelings of disenchantment or disappointment with the present venture in Drink and Ink, stressing that the run of the series was curtailed only by the cost of producing them, which became prohibitive in wartime. Phil Baker is more blunt: "It flopped."

The photographs of the suspects makes for the strangest and most interesting element.  They are all impersonated by Wheatley and his friends, but while the basic idea is in keeping with the playfulness of the series up to this point, the joke dies in execution, since the book itself explains the real identities of the stand-ins under the character names. This robs the exercise of the verisimilitude that was its original selling point, and replaces it with a weak in-joke that is liable to freeze the smile on the reader's face, not least because for the most part the assembled cast are not terribly notable cronies of the author's. Among the more interesting are Wheatley's wife Eve Chaucer, fellow author Peter Cheyney (already lavishly name-checked in The Golden Spaniard), and Val Gielgud as the corpse. Also in the cast is Wheatley's step-daughter Diana Younger, to whom he dedicated The Golden Spaniard with the most fulsome of praise, but who was proving an increasing trial behind the scenes, given to excesses of frivolity and sexually provocative behaviour, to say nothing of the disinclination to shrug off a soft spot for Nazism she had acquired on a recent trip to Germany.  Wheatley and Links themselves appear as small time crooks 'Scab' Wilson and 'Mugs' Masters.

Wheatley seems to suggest in Drink and Ink that these photos were taken at a party in his house, which had been decorated to resemble the nightclub in which the events take place, and for which performer Ruby Miller, an old friend of Wheatley's, doubled-up as both real and fictional main attraction. However, he also says that the party was intended to celebrate the book's publication, rather than its conception, so I'm not sure how the two tie up.

The Crime Dossiers were only ever diversions, delightful interludes between Wheatley's more substantial works of fiction, but the first two, for my money, maintain their charm and fascination, especially if you are able to get an edition that duplicates the actual physical pieces of evidence rather than, as in later reprints, merely photographs of them. Nonetheless, by the time of The Malinsay Massacre it was obvious that the series was coming to an end. Herewith the Clues sounded the death knell; all too clearly the authors had run out of energy, enthusiasm and imagination. There is a desultory, perfunctory feel to the whole thing. The party's over.