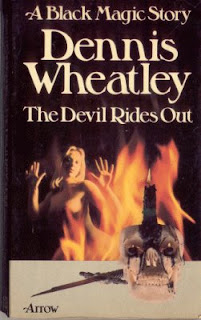 When I was growing up in the late nineteen-seventies and early nineteen-eighties, every house had a bookcase, and every bookcase had at least one copy of a novel by Alistair Maclean.
At least, that's how it seemed to me. God knows how many copies he sold, but back in those days when even corner grocery shops sold paperbacks he was ubiquitous indeed.
Now, it is not simply that he is no longer widely read. I wonder if anyone of a generation younger than mine could even hazard a guess as to who he might be.
Are any of his titles still in print? I suspect not.
I do not absolve myself from this apathy and ignorance. I have never read an Alistair Maclean novel in my life.

But a part of me has always been drawn to forgotten popular novelists, and I love rediscovering them.
Their works are hidden, secret worlds; islands, almost, cut off from the mainland, where life continues as it has always done, untouched by change of any kind.
It is in their pages, in the words of these who wrote not for posterity but for an eager and receptive audience of contemporaries, and not to inform or impress but merely to divert, that we can most vividly see the exact mood and flavour of the past pass as if living before us.
Works of historical recreation may or may not do a good job of mimicking this immediacy, but in Wheatley we see decades past actually staggering to their feet and returning to life.

Dennis Wheatley, like Maclean, was one of the most popular novelists of the twentieth century, and an equally ubiquitous figure in the bookshelves of generations older than my own.
His first novel was published in the thirties, his last in the seventies, and throughout that period he maintained a phenomenal rate of output in a series of bestselling thrillers, ranging in theme from historical to political to supernatural.
For most of my life, one could find him in any jumble sale, any charity shop. In this way he remained a living presence, even among the increasing majority that never read him.
The first Wheatley paperback I ever saw was at my grandparents' house. It was definitely a black magic title, almost certainly The Haunting of Toby Jugg, and in the Arrow paperback series featuring a topless blonde woman on the cover. (This 'tits edition', as the series is known to connoisseurs, is among the most iconic and evocative of all Wheatley jacket designs; a number of people to whom I have mentioned this project have instantly cited it as their first, abiding and in some cases only memory of Wheatley as a 'live' literary presence.) Now, he is slowly beginning to disappear.

Gina Wisker wrote in Horrors and Menaces to Everything Decent in Life: the Horror Fiction of Dennis Wheatley (in Clive Bloom [ed]: Creepers: British Horror & Fantasy in the Twentieth Century [1993]):

Most of the bookshops I have visited in an attempt to get hold of Wheatley's novels have declared him out of print, but he isn't... W. H. Smith, bastion of popular fiction, couldn't trace his work on their shelves in Cambridge, and returned my downpayment for those supposedly in print, declaring them no longer so. One Cambridge bookshop specialising in ordinary secondhand books said were they offered any they wouldn't touch them.

Though his supernatural novels represent a tiny fraction of his output, it is now thanks solely to them, and in particular to The Devil Rides Out, made into a successful Hammer Horror film, that his name endures to the extent that it does.
It is not, however, a respected name. Even in his heyday, higher literary critics scoffed at the perceived defects in his literary style, though his habit of cheerfully agreeing with them rather than taking up cudgels blunted their assaults somewhat.
Today, he is invariably dismissed, partly for this reason and partly for the crusty traditionalist politics that even the most fantastic of his novels usually find time to put the narrative on hold for, and have his characters espouse on his behalf.

Julian Symons in Bloody Murder, a guide to crime fiction, speaks for the consensus, more or less, in declaring that Wheatley's works "indicate how low is one literary level of popular success" and defining his style as "chunks of pre-digested history served up in a form which may appeal to readers with a mental age of twelve."
Critics invariably take him to task for what Wisker calls "all sorts of social stereotypes, as well as glaring and quite irritating (or satisfyingly predictable) examples of the ideology of the British people at a particular time" and "a fascinating perspective on the cultural norms of the time and the ideological implications of all the forces which stress the normative and reinforce the status quo." (In other words: for accurately reflecting the temper of his time and the mood of his readers: now as then the only safe way of selling books.)
Wisker writes disapprovingly of the fact that "Wheatley delivers an ultimately rational and controllable horror to a readership who desire flights of the imagination but wish to have their values reinforced at the end", and endorses a review of the film version of The Devil Rides Out that condemns the manner in which "the fatal attractiveness of evil is inevitably undermined... by (the) insistence on punishing the seductive." (In other words: the fact that the baddies lose.)
The villains, these people always point out, are "visibly so, usually deformed, not British" (Wisker again) and, most of all, physically ugly. (But, as we shall see, a surprising number of Wheatley's heroes are also explicitly described as ugly, Rex Van Ryn and Gregory Sallust among them. Wheatley, in fact, has a peculiar quirk of describing just about all of his characters, male and female, hero and villain, in terms of their physical flaws and imperfections.)

A recent BBC documentary, Dennis Wheatley: A Letter To Posterity, made for a particularly chilling warning of what may happen to his remaining reputation if this process is left unchecked. The Letter, as its title suggests, was written not for publication, and intended not for his popular readership but as a legacy to the future. It is a tract in which Wheatley envisages a future Britain enslaved to leftist totalitarianism, and urges action to stop this process in its tracks.
Needless to say, this is was tackled with all the open-mindedness you'd expect of a BBC documentary. While selectively misleading extracts from the letter are read by an actor doing a barking Blimp voice, pundits complain that the Letter "advocates meeting in secret societies to cook up a coup or plot, rather than advocating open, lively discussion"; another says that "the call to arms grates somewhat." Indeed it does - so long as both programme and panelists remain determined to obscure the fact that the work is a prediction, in which Wheatley is imagining a future of totalitarian subjugation, wherein armed resistance would be entirely reasonable, and open, lively discussion impossible. The way the programme slants it, it's as if he is advocating the assassination of Attlee's post-war government. (I will give a sober hearing to the Letter To Posterity in a forthcoming post.) 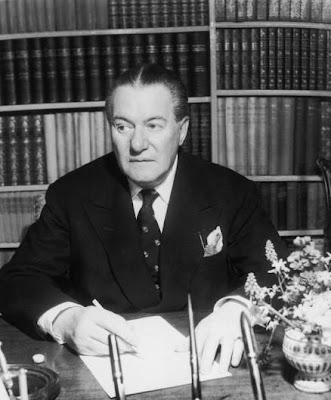 Wheatley was phenomenally popular, a fact that should warrant our serious attention in itself. He was read avidly by all classes of society (up to and very much including royalty) and his sheer longevity as an author means that we are able, if we are so inclined, to read his books chronologically and watch a century pass living and breathing as we go.
I am not sure that anybody since his contemporaries, who read each new book as it appeared, have felt so inclined, however, and even they, of course, would not have had the historical perspective to really see this process in action.This is where the Dennis Wheatley Project comes in.

Simply stated, the project is this: I am going to read all of Wheatley's books in order.
The majority of these posts, therefore, will document my reactions to each of Wheatley's books as I read them. I will also post on general topics pertaining to Wheatley's life, career and legacy, his outlook, his contemporaries and such ephemera as the film adaptations of his books.
What little socio-historical value there may be in this will, I suspect, be found in the fact that Wheatley does not merely reflect the temper of his age but actively engages with it (that he does so from a now unfashionable perspective is a detail you are at liberty to find dislikeable if you are so inclined, but which in no way invalidates or renders less worthy the task of analysing the process) and because, though his work has been more or less forgotten, I have yet to pick up a Wheatley book I have not enjoyed.
Many have surprised me, however, in what they reveal about the range of their author's interests, his literary inspirations and references, his knowledge and his unerring sense of what his readers will want of him. Even feeling I knew him as well as I did, I was quite unprepared for the actual content of such striking and bizarre works as Such Power Is Dangerous, Black August and The Ka of Gifford Hillary to name just three. 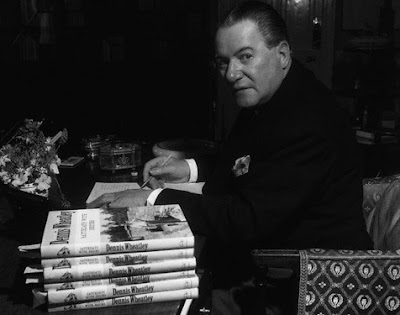 I must also come clean about one other thing here at the outset. I have the nagging feeling that those who snidely dismiss Wheatley's works as reactionary juvenilia are not just priggish bores but also very wrong: what Wheatley I have read (a lot, but a tiny percentage of the whole) points me strongly towards the conclusion that he was, no is - for books, unlike authors, do not die - a fine writer.
He is also an eccentric writer; that is to say a supremely individualist one: it is very hard to mistake his work for anyone elses. This surely calls into question the extent to which it can be waved away as formula writing. Perhaps his technique was naive and often imprecise, but in his marshaling of his materials and narrative style, his imagination, and above all his use of popular narrative formulae to articulate a consistent worldview and speak in a clear and unwavering authorial voice, he was by no means a negligible craftsman. Even his sternest critics concede that he could tell a tale, and that his dexterous blending of fact and fiction was innovative and influential.

I think his reputation suffers partly on account of his politics, and partly from the automatic tendency of one generation to look down on the frivolous diversions of the generation that preceded it. But there is such a thing as qualitative judgement in popular culture, and if the aim of this site is in part to examine Wheatley's work from that perspective, I make no bones of the fact that the likely outcome of that enquiry is predetermined, and I will be surprised indeed if I am given cause to moderate it.
I love the books of Dennis Wheatley. And as much as it is concerned with analysis, this site will be concerned with paying tribute to one of the most charming, cranky and enjoyable writers of the last hundred years.