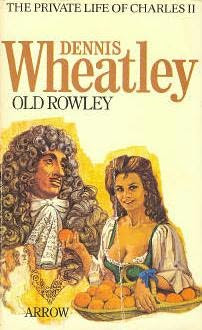 Reflect for a moment on how confident Dennis Wheatley must have been feeling by the end of 1933!
In order to stave off bankruptcy he decides to write a novel, does so, and instantly attracts a publisher. He then writes another, has it published and sees it become an overnight bestseller, reprinted over and over again. Shortly after, the film rights are sold.
As an experiment, he writes still another novel in a mere fortnight: though somewhat guilty over the cynicism towards his readers inherent in such an exercise - a cynicism that would never be repeated - the book is another justified smash hit.
And it's still 1933...
Something of that inevitable assuredness is reflected in the fact that he chose for his next project an historical biography, though with characteristic self-deprecation he goes out of his way in the finished book to characterise it as a mere trifle, and certainly not a learned treatise.
Old Rowley would not be the only time that Wheatley turned his talents to non-fiction, but in its lightness, and the readily-conveyed pleasure the author is clearly having in the telling of it, it remains, perhaps, his most readable. Coming as it does at the end of that first extraordinary year of industry and success, it stands as one of his most justifiably confident works of all. It is still an effortless pleasure to read.
It is not, however, an uncharacteristic work, not by any means. Wheatley's voice comes through more than clearly, and the subject is obviously not arbitrarily chosen.
Wheatley is not merely interested in the reign of Charles II; he has a deep admiration for the man that gives the book a personal and polemical momentum. Charles is clearly one of Wheatley's dearest heroes, Cromwell one of his bitterest enemies - and if you happen to share those prejudices (as I do) the book is an exhilarating job of advocacy.
Wheatley argues persuasively for the identification of Charles as the key figure responsible for dragging England out of Cromwell's dark night of anti-progressive religious mania, and on to the glories of the age of Johnson:
For two hundred years his character has been belittled as a definite policy against the weak and inept Pretenders who succeeded in the Stuart line. The legend that he was nothing but an idle, dissipated Monarch dies hard. yet in the constant sifting of the sieve of time the dross of libel falls away, leaving the gold of truth revealed. The day will come when Charles will take his rightful place in history as the wise, sweet-natured King who led his people out of darkness, anarchy and persecution into the Great prosperity of the Georgian Century. 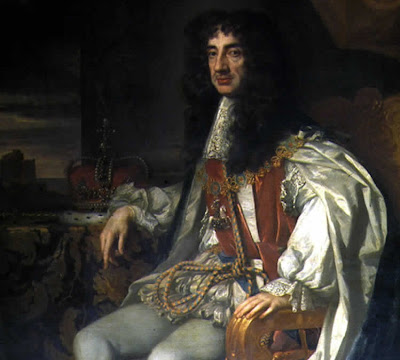 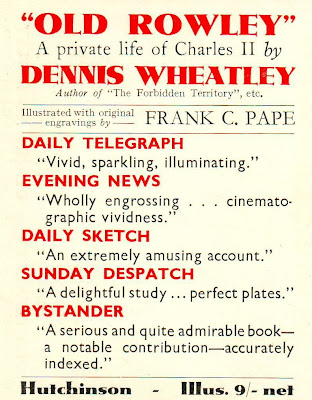 In one especially interesting passage he likens the immediate post-coronation period with the aftermath of World War I, bringing unmistakable echoes of his own 'roaring twenties' period in the wine trade:
Above all, the war was over, and these people who from their early youth had known danger, hardship, uncertainty and distress, had at last come home, freed from the clutches of foreign landladies, welcomed and restored, safe once more to ride the broad acres without fear of death, imprisonment or fine - and all in the glory of an English summer.
In our own day we have known the reaction that followed upon those years of horror, when every able-bodied man received the Armistice as a reprieve from certain death or mutilation. We know that as a result of the strain which the nation had undergone, there was an epidemic of free love, and a sudden uprush of talent among the younger generation. In the pyjama and bottle parties, the night clubs, and the doings of the 'bright young people' of the early 1920s we see reflected the license of the Restoration, and in the writings of Huxley, Coward, Joyce, Sassoon, Lawrence, to name but a few, a repetition of the flame that lit the 1660s.
He goes on to regale us with a number of anecdotes concerning the antics and high-spirited pranks of the new aristocracy, reminiscent of Bertie Wooster and the Drones Club stealing policemen's helmets. One is clapped in the stocks for disguising himself as a tinker, visiting a country village and destroying, rather than mending, the people's pots and pans. Others are nearly lynched by the people for getting drunk in a tavern, stripping naked, and then assembling on the balcony "adopting all the most vicious postures in the nude which they can think of."
As well as providing a fascinating parallel between two periods of history, the passage prompts another reflection.
Recalling Wheatley's centrality to the twenties scene, and reading his list of the period's typical authors, it is intriguing to ponder how his work - to say nothing of his critical reputation - might have differed if he had felt compelled to take up his pen a half-dozen or so years earlier than he did.