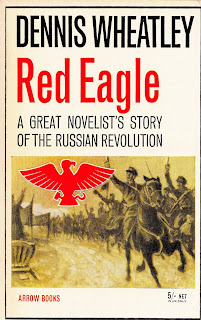 Whatever direction you creep up on it from, Red Eagle is an oddity, and a bit of a mystery.
It was surely what nobody expected next from Wheatley, and it seemed to come from nowhere. There's no hint of it in the phony newspaper that was one of the inserts in Robert Prentice, where Old Rowley is cited as "his only serious book to date" with no mention that another might be on the way, and Wheatley announces his forthcoming titles as Contraband and The Secret War, to be followed by "a shipwreck yarn placed in the South Atlantic, which I may call Uncharted Seas, and another definitely to be called The Golden Spaniard, where I shall bring back my old friends, De Richleau and co."
Interesting to see how far ahead his novels were planned, but in the event both of the latter had to wait, while he engaged himself instead on what would prove his last non-fiction work until The Devil and All His Works some four decades later (not counting the war memoirs with which he is connected autobiographically). Whether it was the inclination or the opportunity that presented itself unexpectedly I don't know, but the result certainly does not give the impression of having been dashed off between weightier courses: it's vastly more serious and impressive technically than Old Rowley, which was basically a sketch in watercolours, albeit a delightful one.
According to Drink & Ink, it came at the instigation of Hutchinson's:

... my publishers had for a long time been urging me to write another biography, but I could think of no character I admired sufficiently to make a book out of his life story. Then, for what reason I have now forgotten, it occurred to me to write about a man of whom very few of the British public had ever heard. His name was Klementy Voroshilov, and I called my book Red Eagle.

Hutchinson's may well have been keen for another non-fiction effort from Wheatley, but at the cost of him delaying his far more bankable thrillers? Hard to imagine them knowingly urging him to postpone both the return of De Richleau and "a shipwreck yarn placed in the South Atlantic" for this! Even its date of birth is ambiguous: all reliable sources place it at this point in the sequence, after Prentice and before Uncharted Seas, but my Arrow paperback edition (a revised edition prepared in 1964) claims it was first published in 1936...

It seems an unlikely proposition in other ways, too. Given De Richleau's sentiments regarding the Russian Revolution, it is surprising indeed to see Wheatley willing not only to give the matter such detailed treatment but so even-handedly too: the book, as Phil Baker notes, shows "broader political sympathies than one might expect." It helps, no doubt, that in Voroshilov, the figure upon whom he chose to focus, he found another of those sensualist, bon vivant conquerors guaranteed to capture his imagination and secure the benefit of his doubt regardless of political stamp, "fond of wine, women and song" (Baker). Nonetheless, the book is another reminder that Wheatley's polemicist tendencies disguised a far more engaged and inquiring intelligence than he was always willing to admit to.
If nothing else, the book is valuable for making the essential point that on the one hand a Russian Revolution was justified, and on the other that what emerged from it was a betrayal, indeed a perversion of its ideals. Of Stalin he writes: "Whether you regard him in the same light as the late John Dillinger, America's first Public Enemy No. 1, or place him in the same category as our national hero Robin Hood, depends entirely on your point of view," and he takes care to remind us that the tragedy of the Revolution was that it only incrementally succumbed to Bolshevism, and was initially conceived and managed in a genuinely beneficent spirit.
Wheatley's concerns are consistent, as are the freedoms he supports and the evils he decries. If you believe in freedom of speech and assembly and the right to dissent, it is only reasonable to despise the Czar and Lenin alike. Yet still it seems odd, somehow, to hear Wheatley banging the revolutionary drum so overtly. (His much- and willingly-misunderstood Letter To Posterity is concerned with exactly the same rights, and likewise counsels revolution as the right means of regaining them.)


The Revolution was hailed with joy throughout the whole of Russia... For a dozen years past various measures had been forced on the Czar from time to time which had foreshadowed some degree of liberty, but in every case the apparent step towards freedom had proved to be an illusion... Now at last the tyrant was gone.

Though not, perhaps, as breezily readable as Old Rowley, the book rewards the reader's attention with numerous amusing insights, both amusingly typical and amusingly untypical. He predicts that "When the history of the war finally comes to be written, perhaps a hundred years hence, it is probable that Hindenburg will be the only great general to emerge from it," and unsurprisingly (given that De Richleau had laid responsibility for the great war more or less solely at his door in The Devil Rides Out) he has a whale of a time with Rasputin:


He never bathed, he never washed, his straggly beard was matted with filth and his uncut nails were black with grime. (...) Into many of his practices Black Magic unquestionably entered and his counsels regarding State affairs were invariably evil. There have been few such monsters in the historic records of the world.

And as so often with Wheatley there are odd cross-overs with his other books of the same period, showing what happened to be on his mind at the time: Marlene Dietrich gets an unlikely namecheck, as she will again in Uncharted Seas, and (with The Golden Spaniard already simmering on the back burner) De Richleau and Dumas are never far from his thoughts either:


Voroshilov, as quick, as gay and as dauntless as D'Artagnan, Budenny the mighty fighter, like another Porthos, while Shchadenko had just a hint of the sly, clever Aramis in his make-up. These three modern musketeers were worth an army corps.

He begins by reviewing Russia's past, and provides a potted history of the Czars that links rewardingly to his known interests in such figures as Ataturk and Mussolini. All is clearly in the established Wheatley voice, and the hand guiding the narrative along is clearly a novelist's:


During the winter there was not much work for the peasant to do, except cut a little wood, thresh his rye, or carry grain into town. Most of the time the greater part of the country is snow-bound so he lay on the top of the stove reciting or listening to tales and legends. Abysmal ignorance of the whole world outside the radius of a few versts was the rule, and superstition was rampant.

Each village had its witch, and the lazy, verminous priests did little to counteract her influence. Occasionally, if some rich Kulak's crops were blighted he got up an agitation against her, and they chucked her in the pond and prodded her all over with pins to find the devil's mark which is supposed to be painless; sometimes they killed her. Saints' days, a continuance on the same dates of ancient pagan festivals, were celebrated with much junketing and a great deal of drunkenness.

Such was the state of Russia in the year 1881 when Klementory Efremovitch Vorosilov was born.

Thus Vorosilov is cast in the role Wheatley found most agreeable in contemporary politics: that of the progressive dictator, charged with dragging a backwards population into modernity, akin to Ataturk (who "forcibly confiscated the fezzes of the Turks") and Peter the Great (who "cut off the beards of the Russians"); both of whom "abolished many senseless fasts" and "compelled their people to accept the customs of more advanced nations." (A classic Wheatley observation, that: nothing more senseless than obligatory fasting to the man who, after all, contributed an article called We Don't Eat Enough at Christmas to the Daily Mail in austerity-blighted 1947!)

It is understandably difficult, now, to find an account of the great wars of the 20th century that is not somehow informed, even unconsciously, by the tidying up of consensus. But here is Wheatley writing in an authentic, individual voice, and as always the sense of being plucked out of our own time and dropped into his is vivid and intoxicating:


For the western nations it meant the end of an era. As Sir Edward Grey said so truly on that fateful night, 'The lamps are going out all over Europe...' Such freedom of speech and action as was known then was never to be known again, even by the children of that generation, nor were they ever to know again the same comfort and security in their daily lives. The peoples were given over bound hand and foot by their national patriotism to the politicians, the swashbucklers and the profiteers... Even in Britain the old freedom is now only a myth, dozens of war measures still circumscribe our actions and our only right is to re-elect a new House of Commons every few years which may voice our grievances but it is not consulted by the little clique of Rulers in the Cabinet on a major crisis.

The right of people to move freely, without qualifications, from one country to another is now denied them. In the majority of countries they may no longer write or speak their true thoughts without risk of imprisonment and must even order their lives in accordance with the Government's will. Most tragic of all, that free intercourse between peoples of different countries and the independence of the individual, which begat mutual respect and chivalry and seemly behaviour, ceased to be when the warring nations went down into the pit.

Seriously: is this really the work of a silly, shallow, superficial, bad writer? Does this square up even vaguely to posterity's caricature of Wheatley and all his works?
It's a real pity he abandoned historical biography after this.