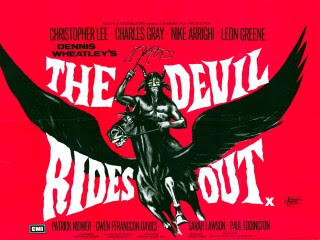 If there is one thing that above anything else has saved Wheatley's name from falling into literary oblivion it is Hammer Film Productions' version of The Devil Rides Out.
For every one person truly familiar with Wheatley's work there are many dozens who think they are, thanks to some formative encounter with this movie. To them, Wheatley is merely a writer of sensational black magic stories, populated by goat men, horse-back skeletons and giant spiders - but at least they can tell you something about him, which is probably more than you can claim for, say, Edgar Wallace. In the final analysis, the service the film has done his legacy almost certainly outweighs the not inconsiderable disservice.
Certainly Wheatley professed himself entirely happy with the movie, writing in Drink and Ink that:
.
... the script-writer [respected American fantasy author Richard Matheson] stuck, as far as film technique permitted, to the story. I wrote to him at Hollywood to thank him for that. His reply was, "I have written several novels myself and had their film versions murdered by the script-writers; so when I became a script-writer myself, I swore that I would never mess up another author's story."

. Wheatley's benevolence towards the film may simply be attributable to the fact that, unlike almost all of the other screen adaptations of his work, it was a significant box office hit, and created a renewed interest in his books. Certainly his attitude is hard to explain on any other grounds, given his general antipathy towards the film versions of his books and his dislike for the way in which they tinker with his plots. For while the film is a definitive and enjoyable example of Hammer Horror, as an adaptation of the novel it cannot really be counted a success. In particular, his claim that it does not significantly deviate from his original plot is simply not true.
. 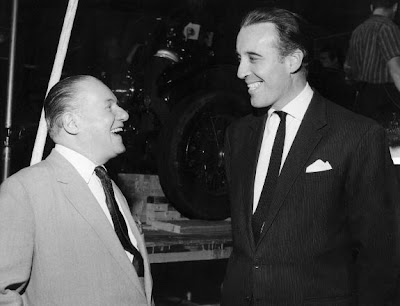 The driving force behind the film's production was its star, Christopher Lee, who admired Wheatley's novels (being sympathetic both to their morality and their metaphysics), and had recently become his neighbour in London and struck up a friendship. In his autobiography, Lee recalls:
.
After years of urging black-magic themes on Hammer, I had a breakthrough with The Devil Rides Out. Conservative, Hammer had always worried about the Church's reaction to the screening of the Black Mass. But we thought the charge of blasphemy would not stick if we did the thing with due attention to scholarship.
.
It is a consequence of this reticence that the film so relentlessly stresses its characters' Christian credentials (no reference here to Simon's Jewishness) and also, alas, nervously plays down some of the picturesque grotesquerie of the Satanism sequences. The replacement of Wheatley's bestial orgies with rather tame drunken revelry was inevitable, but it was a shame to ignore the visual potential of this:

. While the crowd had been busy at the tables, their leaders had donned fantastic costumes. One had a huge cat mask over his head and a furry cloak, the tail of which dangled behind him on the ground; another wore the headdress of a repellent toad; the face of a third, still masked, gleamed bluish for a moment in the candlelight from between the distended jaws of a wolf, and Mocata, whom they could still recognise by his squat obesity, now had webbed wings sprouting from his shoulders which gave him the appearance of a giant bat.

Most significantly, the film removes all reference to the Talisman of Set, around which Wheatley's entire novel revolves, and the pursuit of which is Mocata's sole aim. Without this, or any clear alternative indication of what Mocata is doing (beyond general, unspecified Satanic stuff), his actions in the film actually make no sense at all. In particular, his relentless pursuit of Simon and Tanith and his substitution of Fleur (renamed Peggy in the film following the fair-enough decision to ignore Princess Marie Lou's exotic backstory and instead make her plain Marie Eaton, Englishwoman) seems irrational and self-defeating.
In the novel, Simon and Tanith are astrologically vital to his quest, and Fleur substituted for a specific reason:

."What is this Talisman? Rex mentioned it last night."
"It's the reason why Mocata is certain to make every effort to get possession of me again," Simon's voice came back. "It is buried somewhere, and adepts of the Left Hand Path have been seeking it for centuries. It conveys almost limitless powers on its possessor, and Mocata has discovered that its whereabouts will be revealed if he can practice the ritual to Saturn in conjunction with Mars with someone who was born in a certain year at the hour of the conjunction. There can't be many such, but for my sins I happen to be one, and even if he can find others they may not be suitable for various reasons."
.(...)
.The Duke nodded. "The prayers of a virgin woman are amazingly powerful in such instances, and the younger she is, the stronger her vibrations. You see, a little child like Fleur who is old enough to pray, but absolutely unsoiled in any way, is the nearest that any human being can get to absolute purity. ..."

But in the film Simon is simply the newest recruit to Mocata's circle, with no particular significance to his (unstated) plans. After De Richleau spoils their meeting by abducting him, Mocata continues to go after him out of pique, and abducts Peggy to punish them when he is thwarted, making him both petty and curiously self-destructive, since as things stand in the film it would surely be in his interests to stop annoying De Richleau once he realises how formidable an opponent he is.
.Then, just as they had done with their version of Dracula ten years before, Hammer have for budgetary reasons kept all the action in one country, thus ruling out the entire climax, which saw the heroes travel to France and then to a mountain temple in Greece in pursuit of Mocata. While the loss of this final section is regrettable in itself, especially for anyone who comes to the film after reading the novel, it also has the more serious effect of undermining Wheatley's very carefully devised structure. As we have seen, his technique was to have one major action climax about two thirds in, and then, just when the reader is lured into thinking the danger is resolved, to suddenly plunge the heroes into greater peril and rush to another, even more dramatic climax. The substitution of a brief dash to a basement room and the relatively easy use of supernatural incantation to defeat the satanists is not merely disappointing on its own terms, it also seems even more anti-climactic for coming after the film's most dramatic sequence - the visitations in the library. If the cross-country pursuit of Mocata had to have been omitted, then the library scene should have been moved to the ending.
. 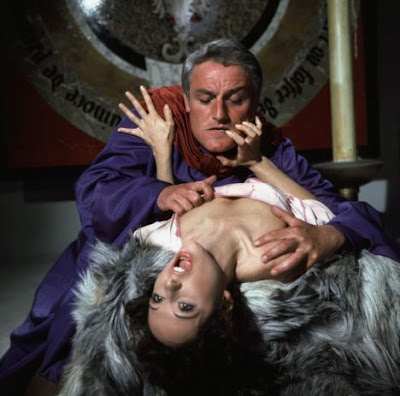 As sheer entertainment, the film deserves its ever-growing reputation as one of the key works of British horror cinema, and a few of its deviations do count as improvements, not least Charles Gray's performance as Mocata, more effective, I think, as a silkily sinister Englishman than a physically repulsive, bald European; fat, heavily perfumed and addicted to sweets.
Wheatley gives him a good line when his final effort to remove Simon from Richard's house fails - "I will send the Messenger to your house tonight and he shall take Simon from you alive - or dead!" - but Hammer's is better: "I'll not be back, but something will..."
Christopher Lee is pretty good as De Richleau, if a little too young and lacking somewhat in the bon vivant expansiveness of the character as written: Lee's austere interpretation is more ascetic than aesthetic. (Though Wheatley was, again, more than satisfied: "Christopher took the part of the Duke de Richleau and played the role magnificently.")
The film is also to be commended for its excellent art direction, sets, costumes and period look, all of which Hammer could have sacrificed to save money but wisely retained.
The special effects, on the other hand, could have made judicious use of a few extra pennies, and most of the miniatures and superimpositions are now showing their age. The giant tarantula is an understandable substitute for the pretty much unrealisable hideous slug-like something, but its appearance is haphazardly handled. Worse, the close-up of the Angel of Death's skull face is seen against the blue-screen background that should have been removed and replaced with the background of the room - a near-unaccountably careless mistake.
In his autobiography Lee argues for a remake, noting that he is now closer to the correct age of the venerable Duc, and admitting the room for improvement in the film's visual effects:

It wasn't possible in those days to show a winged horse charge in with reins held taught by unseen hands and stirrups extended by unseen legs. Our horse's hooves slipped about on the studio floor, and though the animal did some good stuff rearing up and trying to strike away vases of holy water, it was on the whole a relatively low-key spectacle by comparison with what we could do with computer special effects today.

I counsel caution, however. Special effects, and special effects alone, have improved since 1968! It is hard to imagine any future film version of the story retaining one tenth of Hammer's respect for Wheatley's original style and milieu. Indeed, for all its faults, one has only to watch five minutes of The Haunted Airman to realise how basically sound Hammer's film is in mood and conception.