Other than to briefly mention the fact that it exists, Wheatley has nothing whatsoever to say about The Secret of Stamboul in his autobiography.
Odd, because whatever he might have thought of it at the time, by the time he was writing Drink and Ink, with The Lost Continent and To the Devil a Daughter behind him, it must have seemed a most uncharacteristically reverent production.
As an adaptation, it is probably the most solid of all the Wheatley movies.
.
It scores over The Forbidden Territory in particular in the better location work allowed by what seems to be a somewhat higher budget (both films were produced by Richard Wainwright; this one was directed by Andrew Marton). It also boasts a stronger cast, with early appearances from James Mason as Destime and Kay Walsh as Diana, and a gorgeous-as-ever Valerie Hobson as Tania (above).
The real star of the show, however, is actor-playwright Frank Vosper (who you may remember from Hitchcock's original version of The Man Who Knew Too Much) as the eunuch Kazdim. Vosper doesn't quite match the grotesque physical dimensions of Wheatley's description, but he catches fully the innate repulsiveness of the character. Sadly, it was his last screen appearance: the following year he drowned after falling mid-ocean from a transatlantic liner. Despite much initial speculation the death was officially declared accidental.
.
Of course, the screenplay comes with its full expected share of alteration, omission, concision and simplification.
Swithin Destime understandably becomes Larry Destime, and there seems to be no covert government involvement in his going to Turkey: he is employed by Diana's father just to sniff around on the off-chance that something's brewing that might affect his tobacco business. For this reason, Diana is not as heavily involved in the affair, and the entire dynamic of her relationship to Destime is reversed: she falls for him and more or less stumbles into the perils from which he must save her.
Tania, on the other hand, is completely reimagined and given Diana's centrality to the plot: she and Destime get heavily involved from the start, and we are made instantly aware of her double-agent status. She is working for the eunuch with extreme reluctance (she's not that bothered by the deception and duplicity in the book until she falls in love) and even before meeting Destime is engaged in attempting to double-cross him and escape his clutches. Since the plot no longer requires her to fall for Peter, his role in the action is also greatly reduced, and he is played (by Peter Haddon) almost as comic relief, as a Ralph Lynn-type silly ass.
To make things simpler, the revolutionaries' gun depot is at the tobacco plantation itself, and Reouf is an employee of the company and a chance acquaintance, rather than the source that Destime in the novel spends some time deliberately attempting to locate. More charmingly, the secret jihadists' rendezvous is no longer a covert gathering on a rooftop but a stylish nightclub, where the clientele sip cocktails and listen to lounge jazz in illicit fezzes and veils.
But while these changes make only a slight effect on the plot's initial trajectory, their combined effect necessitates a wholesale rewriting of the ending, not least in its complete removal of the British Embassy's involvement. It's an amateurs' job the whole way, with Destime and Tania, assisted by Peter and Diana, foiling the revolution themselves.
Under the circumstances it seems only fair that Tania should be allowed to live past the climax, and that she and Destime should walk into the future together.
. 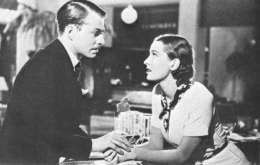