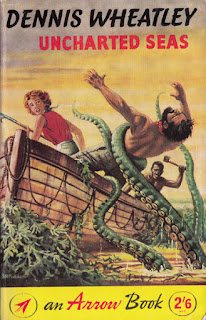 Wheatley freely admitted that Uncharted Seas was a reprise of They Found Atlantis; he was even happy to pronounce the newer effort distinctly inferior.
It certainly is derivative, but I generally found it the better book (save in one respect that would scarcely have troubled Wheatley, and which I will get to shortly). The fantasy elements, when they come, are not quite so distractingly weird, and because it is almost entirely action it doesn't feel so much like a work of two (warring) halves. The book does not draw breath once until its final quarter, and then only very briefly.
Try this for size:

Another great wave hit the ship a resounding thud. She gave a sickening lurch, lifted with alarming rapidity, hovered a moment, shuddering through all her length as the screws raced wildly, and plunged again - down, down, down - so that the passengers scattered about her lounge felt once more the horrible sensation of dropping in a brakeless lift.

All good, suspenseful stuff, but the important point here is that this is the very first paragraph of the book. We are accustomed by now to Wheatley plunging us straight into the action, but never so literally as this! What these opening chapters reminded me of most was The Poseidon Adventure, but whereas that film (and most disaster movies like it) begin as soap opera, introducing us to the characters and their situations and then putting them in peril one third in, Wheatley starts with the disaster and lets us catch up on the protagonists, their pasts and their personalities in short gasps while the action is ongoing. As technique, it's both intelligent and effective. 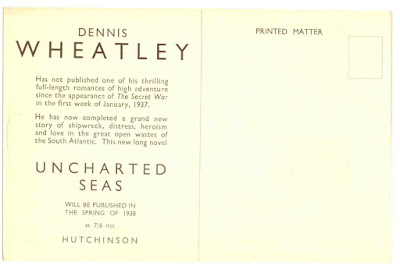 So who do we have on this lurching Swedish cargo vessel? Well, firstly we have the expected selection of intriguing character names, including a heroine called Unity Carden and another called Synolda Ortello ("vaguely reminiscent of Marlene Dietrich, but Marlene in a part where she was a bit shop-soiled and prematurely old"), with Yonita Van der Veldt showing up at half time.
Keeping them company are the typical Wheatley's winter assortment of disparate males. There's Juhani Luvia, a plucky Finnish ship's engineer, resourceful from first to last, save for a brief interlude when he gets drunk out of his nut in a jealous rage for the love of Synolda, and accidentally gets one of his own crew shot. ("How could you, honey - a sweet thing like you - interested in that greasy wop, and - snakes alive - he's old enough to be your grandad!")
Jean De Brissac is a French army captain with the inevitable D'Artagnan moustache, and a good sort, if a touch accident prone and hot-headed. ("Queer people, the English," he reflects at one point, looking at Unity, "and particularly their colourless, flat-chested women".)
Basil Sutherland is an Englishman who starts off a wastrel and a drunkard, but abandons his reprobate ways and comes good when he falls for Unity and starts writing her soppy poems. (This is the least he can do, considering his attempt to steal brandy in a lifeboat precipitates a race war that leads to the death of her father; luckily she hated him and stops just short of thanking Basil for the service.)
And lastly, there's Vicente Vadras, an "amorous dago," and shifty to boot. He's basically a reincarnation of Atlantis's Nicholas Costello, and caddish enough to use his knowledge of Synolda's guilty secrets as a means of manipulating her into bed. Synolda is at first apprehensive ("he probably wore woollen combinations"), but ultimately philosophical: "Her husband Henriques Ortello had been a Venezuelan and she was well versed in their idiosyncrasies,"
For various reasons they're all travelling slightly below the radar, hence the non-top drawer transport. The storm turns deadly, and they abandon ship, with several crew members killed in the panic (along with three nuns - an ill-omen, that!) It's almost too much for Unity, who reflects that she'll "never live to ride another horse":

It's no good fooling myself any more. We'll be swamped inside ten minutes; the boat will sink and we'll all be struggling in the sea. God! how I wish I'd allowed George to make love to me when he wanted to so badly.

Cast adrift in an open boat, with the corned beef running precipitously low, a black stoker called Harlem Joe seizes the opportunity to stage a mutiny, which ultimately fails, but leads to much loss of blood and life. With order restored, but no hope of reaching land, all seems lost until a distantly sighted ship turns out to be the same one they had abandoned, still upright and now in calm waters. Back on board they repair the damage and head for the nearest land, but become stuck fast in a thick carpet of green weed. Attempts to hack a course through it are abandoned when it proves a hiding place for vicious giant octopussies. Once again they find themselves seemingly helpless, albeit somewhat better provisioned than previously:

Unity's first thought was the happy one that she would be able to get all the things she had been compelled to leave in her cabin when they abandoned ship; her own hair tonic, brushes, bath salts; sleep the clock round in her favourite nightdress, and revel in clean undies when she got up.

Then when all seems hopeless again, they glimpse what seems to be a strange animal with long legs and a huge head making its way towards them across the weed, which turns out to be a person on stilts with a huge balloon strapped to them. This is the fair Yonita ("little more than a child, although an exceptionally well-developed one"), part of a 250 year old colony of shipwrecked mariners inhabiting the nearby island. But hot in her pursuit are some of the inhabitants of the next island along: a tribe of "devilish negroes" who kill any white men who land on their shores, but stage periodic midnight raids on the neighbouring island, snatching away their women and confining them in their grimly euphemistic 'marriage house'. 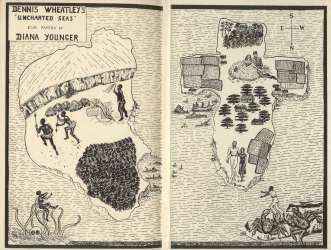 From here, stopping briefly for a brush with some giant decapitating crabs, the book overtly reprises Atlantis, as they prepare to settle in this brave new world, and learn of the strange ways and customs of the people. But while the Atlantean civilisation was like some ghastly hippy commune, this lot live in something approximating the manner of an English country house party in the 1930s. It is, unsurprisingly, a Wheatley paradise: no organised religion, no sexual hang-ups, good food and drink and plenty of feudal deference.  They acknowledge the sovereignty of Christ but have outlawed Catholicism and Protestantism, and radical politics get the Dennis elbow too:

"One of the German sailors who reached us in 1904 had some books by a man named Marx. He would talk for hours, I'm told, about a thing called a 'Proletarian State', but nobody here comprehended very fully what he had in mind, although his description of the way in which the lower orders lived in European countries was curiously grim. His strange preoccupation with this subject became a harmless enough hobby, since, despite his attempts to upset everything here at first, he soon settled down like the rest of us to plough his few acres and drift quite happily from day to day. But I digress..."

As Juhani puts it: "No taxes, no wars, no crook politicians, or any other darned thing to worry about. It'll be grand - simply grand!"
This much is Wheatley at his most charming. But paradise is lost when the heathens next door snatch away Unity and Synolda, and the whites stage their rescue in a long (and literally cliff-hanging) race war finale, that plays as an elaboration on the Abyssinia scenes from The Secret War and, while unquestionably suspenseful, is also unrelentingly bleak.

in keeping with this glum cynicism, the ending is a strange and unexpected one. As in They Found Atlantis, the travelers are resigned to never seeing their world again when a surprise twist enables them to regain it after all. But this time, some stay and some go; some find happiness and others only a stoic resignation. Not every love affair ends happily, and not every problem is neatly resolved. 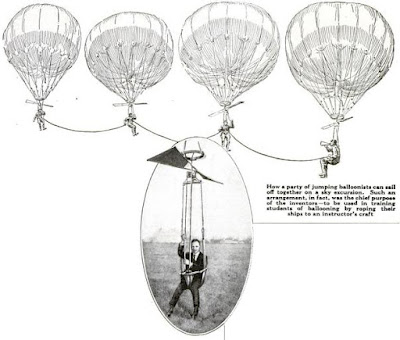 This, then, is Uncharted Seas: sometimes surprising, often naive, and from first to last the sheerest tosh - and all delivered with such perfected story-telling finesse that the pages practically turn themselves.