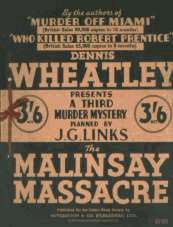 The third of the crime dossiers is something of an oddity.
On the one hand, it offers clear indications that the authors are tiring of their innovation, and are no longer willing to put in the degree of effort and ingenuity necessary to justify the format. There are hardly any of the variety of inserts and variant perspectives that made reading the first installment, in particular, a genuine exercise in detection.
Here we have a few photographs, newspaper cuttings which (with one exception only) tell us nothing of which we were not already aware, and one poisoned pill from which (we are assured) all trace of poison has been successfully removed!
The latter is fun, but no substitute for the wide variety of physical material included in Murder Off Miami and, in any event, is not any kind of clue. Indeed, there are only two decidedly obscure clues to be found in the enclosures, one by incredibly close study of the castle floor plan combined with impossibly close study of one of the photographs; the second is in a later photograph, but its relevance cannot be guessed until the moment it is explained.
The bulk of the book takes the form of typed correspondence between the same two characters, allowing us no chance to be directly misled by the words of any of the other characters. (As such, when a handwritten letter from one of them does suddenly appear it has the effect of leaping at the reader, who would be right to smell a rat.) A further symptom of the authors' weariness is a degree of overkill with regards the crimes themselves: as the title indicates, a steady succession of corpses pile up as the narrative unfolds, each leading to a different red herring suspect, while the police inspector we never encounter except in the third person stands impotently by.
The meta-textual humour that had distinguished the earlier volumes is also ramped up, at times to the point of parody. The book opens with a letter from Wheatley to Police Lieutenant Schwab, asking for more real-life cases to satisfy the demand of clamouring fans of the first two books. Schwab, however, declares himself empty-handed:

It would be a pleasure to help you further and I have been wondering how best to do so. I have been on a queer case recently that started with no more than a broken finger nail but so many of the leading figures of our public life are now involved in this scandalous business that it would be highly indiscreet to give the facts to the world at the present time. Another of my cases was solved after months of fruitless investigation by my studying a chair for twenty four hours on end... but unfortunately it now reposes in the Police Museum of this City and even if I could ship it to you, it could hardly be reproduced by the thousand for sale in bookshops all over the world.

Wheatley himself was less enamored of this than its predecessors, though for a rather different reason, and for which he blamed his co-author J.G. Links. As he writes in Drink and Ink:

I had written the story before leaving England but had had to leave the photographs to be taken in my absence. When I saw them I was livid with rage. The script was about mass murder in an ancient castle in Scotland. Joe had allowed the photographs of the characters and bodies to be taken in the Carlton Hotel, and the backgrounds could not have been less suitable.

On the other hand, however, the actual mystery itself is rather a clever one, and most interestingly, relies upon the means in which it is presented in order to work. In other words, Wheatley and Links have reached a point where the content is dictated by the format, and what began as a cute gimmick is now integral to its structural efficiency. Indeed, if it had been offered as a straight novel written in epistolary form, it might have found a reputation as one of the classic English whodunits of its decade.


As always with Wheatley, it is the incidentals that provide the keenest amusement, especially when the correspondents break away from the matter in hand to briefly address other issues of the day, among them the Boer War ("It may cost us a few score lives but it will be a month's good exercise for our troops to teach these people a sharp lesson, and then we can settle down to run the country properly"), the erosion of class boundaries ("For a woman of title to have an affair with her groom is an appalling error of taste in any circumstances, but we must endeavour to be broadminded") and certain regrettable developments in politics:

McGregor is a more intellectual type than the majority of the Islanders and apparently has become interested in this newfangled nonsense called Socialism; which seems to be spreading through the writings of some crazy German called Marx. I know little about it, except that these people would like to turn the world upside down and ruin us all...

For all its pleasures, though, this is plainly the work of a Wheatley treading water and playing for time. But he would soon return to his best form: world events were again helpfully handing him exactly the kind of inspiration he most relished, and the stage was set for the return of de Richleau and the Modern Musketeers.